The name ‘Macaroon’ comes from the Italian word maccarone which means ‘paste’ and were first prepared by Italian monks. The original macaroons were made from almond paste and egg-whites. This gave the macaroons a meringue-like consistency, with a crisp crust and soft inside. The first macaroons were more like today’s almond-meringue cookie, which we now call amaretti.

In 1533, macaroons made their way to France, where they were perfected and popularized.

The pastry chefs of Catherine de Medici and her husband King Henri II. While seeking asylum in the town of Nancy during the French Revolution, two Benedictine nuns names Sister Margue 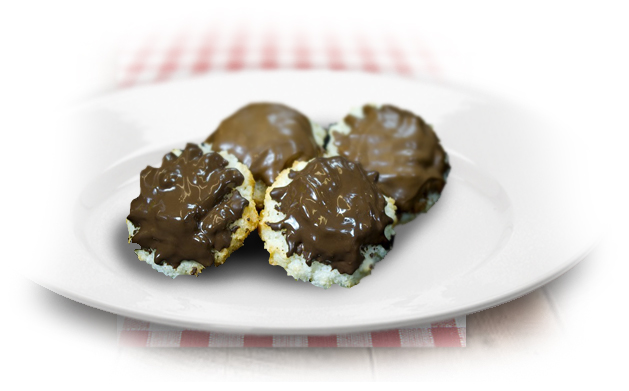 rite and Sister Marie-Elisabeth paid for their housing by baking and selling macaroon cookies. They quickly became known as the ‘Macaroon Sisters’.

The Jewish population of Italy was quick to adopt macaroons as well as they are not prepared with flour, yeast, baking powder or baking soda. Instead, macaroons are leavened by egg whites, which makes them ideal for the eight-day observation of Passover. Over time, the treats spread throughout Europe’s Jewish community and became a sweet treat that was enjoyed year-round.

As time passed, coconut was added to the ground almonds and actually replaced the almonds all-together in certain recipes. This version of the macaroon is most popular in the US and UK and is the one many of us know and love today.